Every McLaren road car benefits from Formula 1 technology transfer. Trace that history back 50 years and you’ll find McLaren’s first Formula 1 car, the M2B. Follow the narrative to the present day and you arrive at the new McLaren 570S Coupe, the first Sport Series model with its carbon fibre MonoCell II, carbon-ceramic brakes and Brake Steer technology all derived from the pinnacle of motorsport.

To celebrate 50 years since McLaren’s Formula 1 debut at the 1966 Monaco GP, we’ve gathered the two cars together – and the 570S Coupé’s distinctive livery honours the M2B, with pure white paintwork highlighted by a central green stripe and silver edging.

The M2B was created just three years after Bruce McLaren founded his eponymous race team and quickly demonstrated McLaren’s flair for innovation. Robin Herd was the car’s designer – a bright young engineer who’d worked on Concorde – and described the M2B’s radical monocoque as ‘an inverted top-hat section tub’. It made use of a revolutionary material called Mallite, which consisted of end-grain balsa wood sandwiched between light-gauge aluminium.

Robin chose Mallite, which is normally reserved for internal aircraft panelling, because it was light, strong and stiff, and combined it with outer sheets of conventional aluminium for extra stiffness and crash protection. Four steel bulkheads were also incorporated, the first and fourth supporting double-wishbone suspension all round, the second and third for the dashboard and firewall between engine and driver.

Formula 1™ regulations in 1966 mandated a switch from 1.5-litre supercharged engines to 3.0-litre naturally aspirated units. McLaren chose a Ford V8 proven at the Indianapolis 500, albeit downsized from 4.2 litres to satisfy race regulations. Only the block, bottom end and cylinder head castings remained unmodified, allowing the mid-mounted V8 to deliver 303bhp to the rear wheels via a five-speed ZF transaxle.

The nascent McLaren outfit worked long hours and seven-day weeks to ready the M2B for its Formula 1™ debut. With no transporter and limited resources, they towed the M2B from England to Monaco behind their Ford Fairlane, affectionately dubbed the ‘White Whale’.

Bruce qualified the M2B in tenth position, and ran as high as sixth on McLaren’s Formula 1™ debut, but he was unfortunately forced to retire when an oil union to the oil cooler came loose.

McLaren quickly regrouped under Bruce’s motivational leadership. Robin Herd re-engineered the oil-cooler system, the team experimented with a Serenissima engine while the Ford V8 was redeveloped for extra power, and the M2B went on to score a sixth at the 1966 British GP, and fifth at the United States GP. Two years later, Bruce took the team’s first victory at the Belgian GP, paving the way for the 12 drivers’ and eight constructors’ championships that have followed since – and further victories have come in motorsport categories as diverse as Le Mans, Indianapolis and Can-Am.

Innovation has consistently fostered success: McLaren introduced carbon fibre monocoque construction to Formula 1; its Brake Steer technology was banned from the grid for offering too great a competitive advantage. And those innovations have transitioned to McLaren’s road cars time and again. The McLaren 570S is no exception. The first of the new Sports Series range – the most accessible introduction to McLaren ownership yet – the 570S is hand-built at the McLaren Production Centre (MPC), next door to the team’s Formula 1 facility in Woking.

The build process starts with the carbon fibre MonoCell II, a passenger cell that forms the core of the 570S. Naturally, the MonoCell II is strong and stiff for exceptional handling and crash performance, but it also contributes to the 570S weighing around 150kg less than aluminium and steel-based rivals.

Like the M2B, the 570S uses race car-style double-wishbone suspension all round, with adjustable dampers that can be tailored – along with the responsiveness of the transmission and engine – through the Adaptive Dynamics Panel, located in the centre of the luxurious hand-stitched leather interior. Select Normal for the daily commute, Sport for a more spirited drive, and Track for the ultimate adrenaline rush at a race circuit.

State-of-the-art carbon-ceramic brakes are derived from Formula 1 and resist fade even under very hard use, while the 570S also employs Brake Steer technology, imperceptibly braking the inside rear wheel to eliminate understeer and heighten agility.

The 570S is powered by a 3.8-litre twin-turbocharged V8 engine of McLaren’s own design, which feeds power through a Seamless Shift Gearbox with rocker-shift controls; they echo the controls used by Jenson Button and Fernando Alonso each race weekend. With a staggering 570PS (562bhp), the powertrain produces almost double the power of the McLaren M2B, allowing the 570S to accelerate from 0-100kph (0-62mph) in just 3.2 seconds and on to a sensational 328kph (204mph).

Fifty years after the M2B made its debut at Monaco, the 570S echos the drive for innovation that McLaren has always stood for. 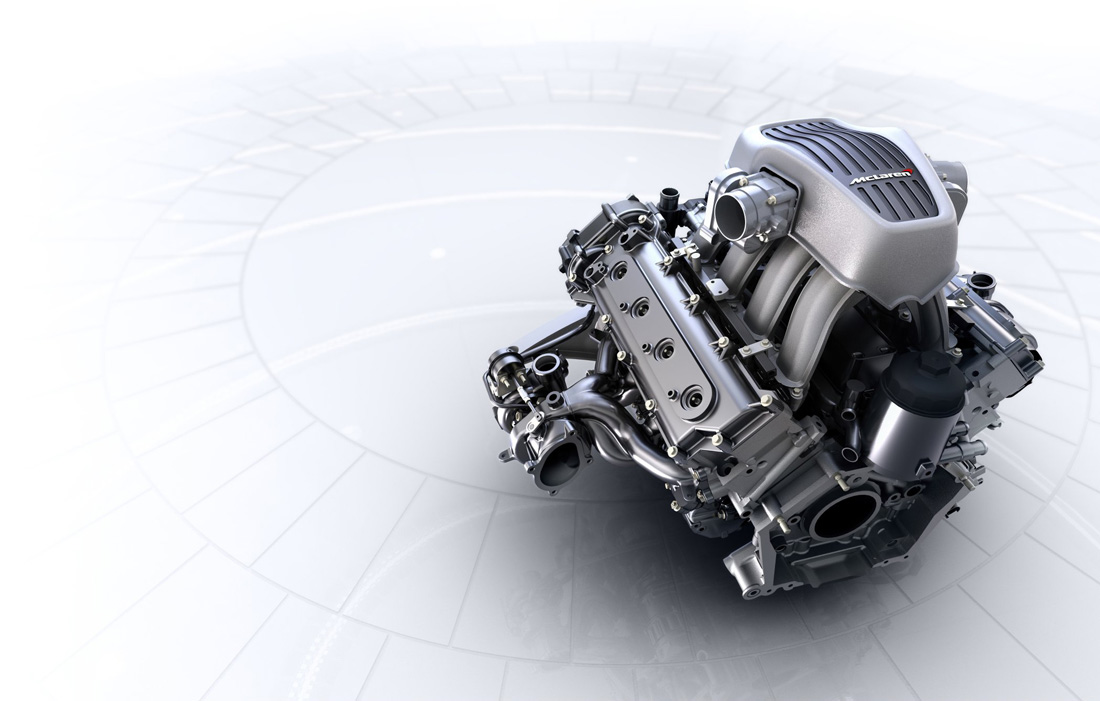